A professional actress for many years with extensive experience in theatre, radio, film and television fuelled my passion to write. Ever since I was a little girl I enjoyed writing stories and would keep friends and family entertained with my incredible world of make believe. Little did I know then that my love of literature, making up plays and creating other worlds would consume me to the utmost extent.

I was brought up and educated in Birmingham but always very proud of my Welsh heritage and I still  love returning to the homeland to visit my cousins and other relatives. Long summer holidays were almost always at my grandmother's house in Crynant, Neath and I spent adventure filled days exploring the countryside and devising games for my my cousins and I to play. It is no surprise then that South Wales became a backdrop for four of my novels.

My love of people, watching and observing them was valuable to me as an actress, as was my experience as a teacher and director but even more so as a writer. I always say laughingly to friends, "Be careful what you say, it may end up in print." In fact when one friend called around and I was busy working on my second novel, God Only Knows, she peered over my shoulder to read and exclaimed, "My God - That's me!"

After a very varied career I finally settled in Devon with my husband, Andrew who has made it possible for me to write full time. We live in the beautiful Devon countryside on a farm with the delightful Pippin our border collie and Ashton the cat.

Westminster Theatre - The Lion, The Witch and The Wardrobe 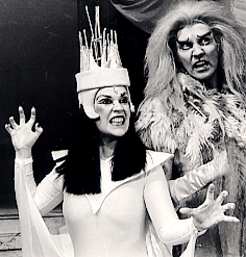 Elizabeth Revill as the White Witch with David Banks as Aslan.

This has to be the most favourite part I have ever played. In an earlier production I   played Mrs. Beaver, which was great fun and on the next tour Vanessa Ford and Glynn Robbins cast me as the White Witch. It was terrific being evil!

"That nasty piece of work the white witch is given just the right Edwina Currie touch by Elizabeth Revill."
Lisa Rothman,  The Stage

"Elizabeth Revill's surly scottish governess Mrs McCready reincarnated in the beyond as the wicked white witch commanding various nasties as Maugrim is effectively bad. My nine year old critic at hand said he had been scared. . ."
Peter Chapman,  The Guardian 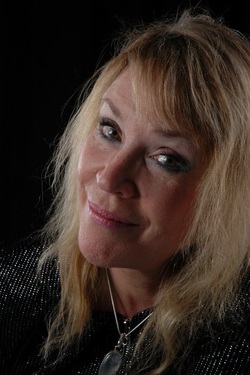 "Elizabeth Revill's performance as Sally is at times extremely moving whilst at the same time maintaining a sense of light and shade."
John Linsie,  Stage

"Elizabeth Revill as Sally has the audience in the palm of her hand from the moment she steps on stage."
Polygon


Working with Women's project, The Writers Theatre Company and Second City Firsts allowed me to work as an actress with writers in creating something for the very first time. This was extremely satisfying and brought many rewards including educating women about Breast Cancer.

BBC Wales TV - "What the Hell Do You Want, Lavinia?"

with Ruth Madoc and Stan Stennet.

Directed by Jack Williams I played Desdemona the dippy, busty, airhead daughter of Lavinia (Ruth Madoc) with some of the most wonderful one liners ever written. At least I thought so! ... "I can't even say good morning to the milkman without you saying I'm trying to seduce his bloody horse." 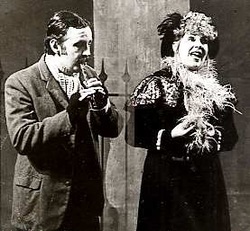 My season at the Birmingham Rep was varied and exciting as I worked with many people who were to become international stars, Alan Rickman, David Suchet, Anna Calder Marshall and many more too numerous to mention. We took two of our plays to The Edinburgh Festival at The Assembly Halls. It was something I will never forget. 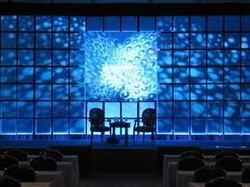 I was a good jobbing actress who was lucky enough to work almost continually playing in theatres all over the country. I loved the variety of roles from playing Kate in Bedroom Farce, Jacqueline de Severac in Murder on the Nile, Daphne Pink in Sailor Beware, to Pantomime Princesses and fairies and the raunchy Roxanne in the Rock and Roll Musical, Leave him to Heaven with Ricky Valance of 'Tell Laura I love her' fame even duetting with him on stage singing The Garden of Eden.

I toured commercially and classically  in a variety of roles playing Katrin Sveg in Marriage Go Round, Lady Capulet in Romeo and Juliet, First Witch and other female roles in Macbeth and many, many more.

I loved my life even though it was hard work, and with very little time for socialising, the other members of the cast quickly became family.It's the nature of the game that friendships are made quickly and well. Even when you don't manage to keep in touch the beauty is that when I do meet up with those I have worked with before we pick up exactly where we have left off.

My touring and travelling days came to an end when my gorgeous son, Ben came along and I could no longer tuck him under my arm and take him with me. He needed stability and so I returned to my second string - teaching, to pay the mortgage and bills. Thank goodness my dad made me qualify in something before I went to Drama School!

Radio featured heavily in my life playing Angela Cooper in The Archers, Jody a very nasty drug pusher as well as being the original Jolene. I loved being on the BBC Radio Rep turning out plays for Radio 4 and BBC World Service. This led me onto Voice Overs and Dubbing an art, which is still useful to me now. This was all thanks to winning the Carlton Hobbs Award from the BBC.

I have recently started dipping my toes back in the acting world, playing Margaret in Leopard by Artaura Productions and Mrs Gable in Shattered Summer, which will be completed in 2013.

Please visit http://www.elizabeth-revill.co.uk  to learn more about the novels published by Belvedere.
For The Killing me Softly Trilogy contact Edward Gaskell and Lazarus Press. 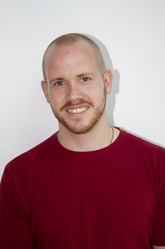 My son, Ben Fielder, started out as an actor and is now following in my footsteps having completed his first novel, Land of the Awoken - a thrilling yarn for young and old alike. He is midway through a highly original Sc-fi novel, Protocol, and the sequel to his first book - Blood of a Dragon is partially completed. Check him out at:
http://www.benfielder-uk.com and
http://www.benfielder.co.uk

URBAN STORY
London Short Story Website
http://www.urbanvirtual.co.uk/#
A story for every station in London! His is Charing Cross.

PS - His story did NOT happen to him!